Just saw one of the creepiest ads of a soon-to-be-over (hopefully) surreal year. I know it’s supposed to be a satirical take on the assumed monotony of our lockdown. But…wellllll…

Did food delivery service, SnackCrate, hire Jordan Peele (Get-Out, Us) to direct this? It features zombie-like, ultra-white characters with blonde hair and dead, pale, pale blue eyes, smiling vacantly as if they were cyborgs programmed to vaguely mimic human expressions. I couldn’t believe the creators were serious. Or, I guess more to the point, comedic.

After some vignettes of the pale family’s soulless life,  SnackCrate delivers a box to a mixed-race family across the street from the ultra-white replicants of this surreal, homogenous suburban neighborhood (reminiscent of Tim Burton’s Edward Scissorhands). The little blonde child walks across the street like a badly programmed robot (I swear, he looks like a Jeffrey Dahmer as a child–or me). The friendly Black neighbor girl opens the box and a golden light emits from it, illuminating the boy’s face. His creepy smile broadens, yet his eyes remain dead, like a doll’s.  I know it’s not his fault; he was directed to look like this. He’s probably delightfully warm in real life. And funny.

Okay, okay, I get it. The “concept” was to portray the everyday, life-sucking sameness of everyone’s lives during the lockdown. (Yeah, those creatives really nailed that one.)(Oh, that was sarcastic, in case you didn’t get my tone.) And SnackCrate is somehow the answer. Of course they never show you what the product is. I assume it’s food. Or munchies for weed. But it could also be a mind-altering drug, for all we know– the one all of these blank-staring zombies are on. Or some sort of alien-generated, mind-control weapon. Or a lightbulb. Maybe they figured the name of the company, SnackCrate, would give away that it’s some sort of food. Like Soylent Green. But I get that it’s supposed to be satirical, i.e. funny.

You’d have to be on a mind-control substance yourself to think this was funny. It feels like it was humor generated by AI, who thought it had a bead on what humans think is comedy.

An aside about blue eyed models and actors.

What’s this thing I see so often lately with models, actors, and characters with ultra-pale blue eyes? I’ve seen that more than in the past in fashion ads and even in general consumer ads. Not just blue eyes, but eyes that seem unnaturally pale. They look like predators. Or Hitler Youth. Or alien vampires.  I mean I don’t have anything against blue eyes (I have blue eyes…though I prefer to described them as “steel grey”–and blonde hair–or had–it’s also steel grey now). Some of my best friends…yada yada.  But I’ve even seen them on non-white models and actors, many of whom, I know, are born with blue eyes themselves (see this interesting story about how prehistoric Britons probably had dark skin and blue eyes). But the point isn’t who owns blue eyes genetically, it’s a conscious casting decision. And the photography and its post-manipulation seem to emphasize the paleness of the iris. When the expression “Blue-Eyed Devils” has long stood for historic, exploitive European colonialism to most of the world (who don’t have blue eyes), this doesn’t seem like the most engaging look. 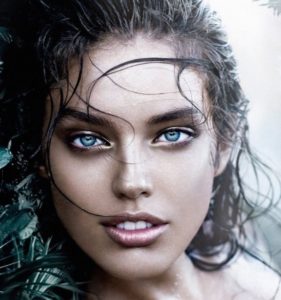 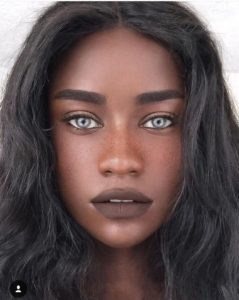 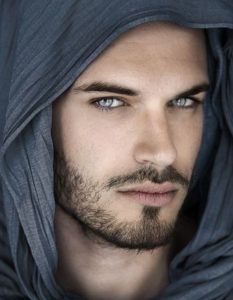 Not only blue eyes.  The pinpoint pupils look distinctly like a predator honing in on its prey.  The paleness of the iris maximizes this. It’s definitely a horror-movie, non-human look. The photographers, art directors, and Photoshoppers are evidently trying to emphasize the light blue iris by reducing the size of the pupils. Ethologically, wide -open pupils signal relaxation, friendliness, not-a-threat. Narrow pupils signal aggression, hunger, threat. As we have evolved from prey species ourselves, we have a primeval fear of predator species with narrowed pupils (oh, like leopards, for instance). I myself remember that reflexive, Australopithecine surge of gut-panic that swept over me years ago when I was an art director at a commercial shoot using a supposedly tame tiger. We were all encouraged to stand next to the tiger for a group, publicity shot. When the trainer raised a morsel of meat on a long stick to get the tiger to sit up, I saw at once its pupils snap to pinpoints as it saw the meat and started salivating, showing its five-inch fangs. Couldn’t wait for the photographer to hurry up and take the goddam picture already. Admittedly, the tiger didn’t have blue eyes–they were a golden color–but the contrast really emphasized the pinpoint pupil, which meant one thing, “I’m going to eat you.”

Oh yes. Getting back to my crit of this SnackCrate spot: Though I may be alone in this, like Will Smith’s lonely character in I Am Legend, but I did feel distinctly unsettled after I saw this ad. Which is ironic because the mission statement on SnackCrate’s website says the whole point is to bring all the world’s cultures together by sharing their local snacks.  You know; by getting people in Mexico City to love Sydney’s love of Vegemite….or something., or people on the West Coast to love Chicago-style “pizza”.  Not a bad marketing message in itself. Maybe that was the point of having the blue-eyed, blonde family relate to their multi-racial neighbors. But now that we’ve been conditioned to be suspicious of pale white people, (even pale white people have become suspicious of each other), I think the way they executed this idea backfires. My expectation (from Jordan Peele’s example in Get Out) was that the creepy little boy was going to first eat the snack offered him, and then eat his neighbors.

The ad communicated nothing about SnackCrate’s noble goal. Or even about food. There was no appetite appeal. No message of bringing people together. Just an assumption about our bleak, colorless (except for the blue eyes) lives and how our salvation from zombietopia is SnackCrate. Whatever that is. Okay! Sign me up.

Watching the ad, I also couldn’t help but flash back to a sci-fi horror movie I saw as a kid, Village of the Damned, in which the monsters were beautiful alien children with ash blonde hair and pale, pale eyes that glowed to hypnotize people into killing themselves. So it’s a personal thing with me. Pale eyes freak me out.

It’s only me. I know. I shouldn’t watch any more post-apocalyptic movies about the last human on Earth, or blonde alien invaders. I should get over it.