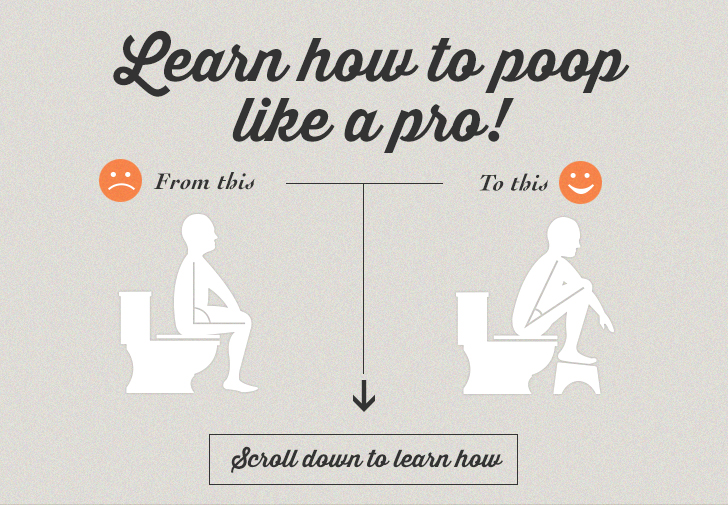 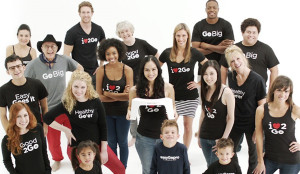 Don’t you hate your health insurance company? Here you pay high premiums every month and when you get sick and need them to step up, they start welching on the bet. Or they won’t authorize a procedure or a test your doctor thinks you need. Or worse, they  just drop you. “Eeeeyew! Sick! Sick! Pre-existing cooties! Get away!” And good luck in those not-so-long-ago days trying to get new insurance once you’ve been ejected from the plane.

Then along comes the ACA (until the Supreme Court ejects it, that is) and not only are health insurance companies not allowed to reject you anymore, each state that wants it can set up a true-non-profit insurance company that’s focused on getting health care to people instead of placating grumpy shareholders with dividends. It’s a CO-OP, or Consumer Oriented and Operated Plan and their goals are to drive costs down without taking it out of the hides of the rest of us.

It’s really rare when you have an opportunity to develop an ad campaign that is part of worthy social movement; something that might actually do some good and start to fix a broken system. We just had that opportunity with Oregon’s health insurance CO-OP, Health Republic. (Okay a blatant plug. But this is a marketing blog, for crying out loud! And I’m marketing…my agency and my client. So go read a more uplifting blog about kale or something.)

The idea of Health Republic (and all state CO-OPs  under the ACA) is to offer a true-non-profit health insurance alternative to the for-profit insurance giants who have been dominating the delivery of health care in our country since they figured out they could make much more money by denying care.

CO-OPs are run by their own members. They don’t have shareholders and the boards are elected by and sat on by members. They are also legally constrained from making profits, paying out executive bonuses and seven figure  compensation packages, shifting surplus revenues into offshore tax havens, or buying multi-million dollar sports arena sponsorships.

Which has made this campaign so gratifying to work on.

One of the first ads to run in it is this gigantic (125′ x 60′) outdoor board hanging on the massive grain elevator on the Willamette River, right opposite Portland’s sports arena, the Rose Center. Last year this was renamed in a controversial $40 million sponsorship, the “Moda Center.” Moda is Oregon’s largest for-profit health insurance company. And there was a lot of outrage over them spending so much to stick their logo on it (not to mention all the corporate boxes inside, and the simultaneously leaked story about the CEO’s  inflated compensation package), especially when health costs had been skyrocketing in the country. 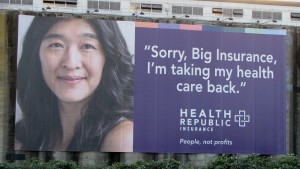 But now, as Blazer fans emerge from the Moda Center after each game (or “Who at 50” fans from their concert), they’ll be greeted by this 60 foot tall message. This is particularly what I was thinking about from the last time I went to a Blazers game and heard all the cynical grumbling and editorial remarks from fans around me sneering about the “Moda Center.” To them, it had always been the “Rose Center” and will remain so, no matter how many millions some giant corporation dumps in smearing its logo all over it. Just like Ho Chi Minh City will remain Saigon. Damn it!

So I was thinking about those cynical, angry fans when I was working on this campaign.

Earlier this year, at the end of the first ACA enrollment period, and soon after the brouhaha around Moda’s $40 million sports arena sponsorship, we ran the ad at lower left. It provoked an editorial hew-and-cry in the local press saying it was a direct slap at Moda, which had every right to use its profits anyway it saw fit. But Health Republic’s innocent attitude was, “What makes you think we’re talking about you, large, unnamed, for-profit insurance company? Don’t be so touchy.”

But it served well to introduce the new concept in an atmosphere of public indignation over existing abuses in the traditional, for-profit, health insurance industry. Thousands signed up, even some who said they were doing it even though they hated the very idea of Obamacare (then call it Bushcare for all I care).

Anyway, it is fun to run edgy advertising for a client that’s also the champion of a worthwhile social cause. And it’s so effective to tap into people’s gut emotions, especially when they’ve made them so clear. Our research showed that people resent their health insurance companies. Most people, do anyway. They think it’s unjust  that somebody seems to making a profit out of their misery and sickness. People have been yearning for a different system for decades.

So now along comes a different system, one that treats health insurance like a publicly regulated utility, one that can’t make a profit on your premiums. One that’s governed by its very members. And people have been snapping it up.

And you’ll be okay, Big Insurance. This is for the best.