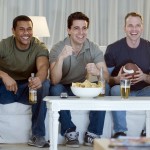 Probably one of the dullest creative ideas in advertising is the Three Guys on a Couch scenario. Talk about phoning it in. I was watching a show the other day, and in the course of an hour, there were four different 3GOAC spots, all for different products (which I immediately forgot).

Here the three dudes (always two white and a black guy) are getting all settled in for the Big Game when the Problem is presented. The Problem being one of them offers the wrong snacks or the wrong beer or the wrong pizza or the wrong male enhancement product. Or one has to explain to his girlfriend why he’d rather hang with the bros than go do something with her. Or they are all playing some unseen video game together when the Problem arises. Or it isn’t three guys, but a guy and his girlfriend fighting over what to watch. Doesn’t matter. It’s dull, dull, dull.

My question is, does an ad agency actually pay people (I mean above minimum wage) to generate the Three Guys on a Couch concept? Or does this come with the new Adobe Storyboreder-Pro? You just click on 3GOAC in the Concept Menu and up pops the template. Who needs an expensive creative department? Or even an ad agency?

Under all the rules of what constitutes creativity, Three Guys–or Two Guys, or A Guy and A Girl, or Four Guys and Three Girls–on a Couch is a blatant violation. It’s tired. Aptly, it’s about as tired as sitting on the couch yourself, brainstorming for your client’s ad with your own bros and thinking up, “Hey, what if we had three guys on a couch?”

“Yeah!” says the art director, enthusiastically from the other end of the sofa, “And they could be about to watch the Big Game!”

“And maybe one of them could have a pissed-off girlfriend!”

“Really pissed off, ’cause he won’t go to some stupid chick flick with her.”

“And he’s really embarrassed that he’s so whipped in front of his bros!”

Yeah, tell your creative team to get off the couch and earn their $7.45 an hour.