Don’t you love those Esurance spots that show how dumb old folks are when it comes to modern inventions like social media and mobile gaming? Isn’t it adorable how that one old lady is crushing hard candies on her table with a literal hammer and thinking she’s playing Candy Crush?  Or the other old lady has taped pictures to her literal wall and thinks she’s sharing them on Facebook? They’re so funny because they’re so true; old people are dumb as walnuts.

Okay, now let’s do a mind experiment and recast those old ladies with black or latino people. Same script. Is it still as funny?

Actually, you don’t have to imagine because they did one with an old African-American guy who is so dumb he actually thinks you’re supposed to rewind rental DVDs. Ha! 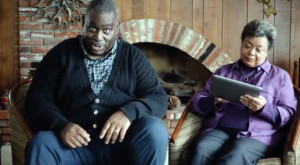 The point Esurance is trying to make (I mean esurance, because the lower case “e” makes them seem so much more accessible) is that young, smart people know that if Geico claims you can save 15% in 15 minutes online, you can save even more in half the time with Esurance. What a brilliant strategy: First remind me of the competitor’s brand position (which is itself utterly weak to begin with) and then vaguely say we’re twice as fast. Yes, twice as fast. What’s that? Let’s see, fifteen, divided by two,  carry the one… SEVEN-AND-A-HALF! Ooo…that’s fast!

Of course, we get it:  The intended audience isn’t composed of old people or aging Baby Boomers. The campaign is for very young (usually male) drivers who just want the minimum, catastrophic insurance required by state law to register their pickup truck. They don’t care how fast or well their insurance company takes care of them when they do have an accident; they just want to be able to show that they have minimum coverage when asked for their license and registration by Officer Muzzy. And besides, they don’t plan on having an accident. Duh!

The old people in this campaign, on the other hand, who would have had some experience with how the world actually works (and in particular, insurance companies) would know that it isn’t how fast it takes to get a quote, it’s how fast it takes the insurance company to come through with a claim, a tow, repairs, a rental car, and all that boring service part of the business.

The Baby Boomers would also be of an age where their own parents, or they themselves, are terrified of getting older, of senile dementia, physical infirmities, and the horror of Alzheimer’s. So they probably don’t see the humor in the jokes.

I’m surprised at Allstate (who owns Esurance), whose main commercials are otherwise so smart. Their agency since 2011, Leo Burnett, who did the terrific “Mayhem” campaign and the intelligent spots with Dennis Haysbert, also did this utterly witless and offensive campaign for Esurance.  Great idea. Baby Boomers are still the biggest market demographic in this country, and are the ones most likely still paying the insurance premiums for their kids and grandkids.

So, by all means, let’s insult them.

The other strategic boo-boo this campaign makes is thinking that the battle is over how fast it takes to get a quote. Did they run some focus groups on this? I always thought Geico’s own purchase proposition (15 minutes can save you 15%) was itself one of the weakest brand positions on the planet. They may be crappy in every other aspect of service, but…”oh, let’s see, what else have we got, Murray? Fifteen minutes? Fifteen percent? Okay…well…if that’s all, let’s run with that. At least it’s not as dumb as ‘so easy a caveman can do it.'” (A geriatric caveman.)

“But be sure to say ‘could save you’ and not ‘will save you.’ Don’t want to over-promise.”

Here’s the other weakness of this “cheaper “position; make sure you actually are cheaper. I went through the exercise of going onto Esurance’s site in researching this post only to find out that getting the exact same coverage as I was getting from USAA was, in fact, about 36% more. So, in spite of the daily robo-calls, hourly e-mails, and irritating pop-up banners I get from Esurance now, they’ve completely lost me forever. They hung their hat on cheaper, and weren’t. End of pitch. (It did, I’ll admit, take under seven-and-a-half minutes; just six minutes ten seconds.)

Rule: Don’t remind me of your competition.

But wait! There’s more! Esurance compounds this marketing error by actually reminding us of their competitor, Geico. In fact, the first few times I saw their spots, they seemed so similar in message, lame humor, and production quality that I thought they were Geico spots. But that must be because I’m a dumb senior citizen.

Really, Esurance, nobody thinks taping her photos up on her living room wall is the same as posting them on her Facebook “wall.” Nobody thinks you have to rewind DVDs, or that smashing candy on a table is a game, or that standing on your roof using a megaphone is a good way to search for roof repair. And nobody thinks that the problem with shopping for car insurance is that it takes fifteen minutes online (It doesn’t. Not unless they have weak-ass servers in Pakistan.) That isn’t a problem. And it doesn’t need a solution.

And no it doesn’t humorously highlight how modern Esurance is. Especially if they think you can still rent DVDs.