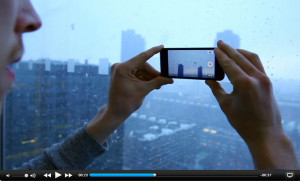 I couldn’t help noticing the new iPhone 5 commercial from TBWA/Chiat/Day. It features a montage of pretty, young people taking pictures of all kinds of pretty things with their iPhones. Very pretty. Lots of appetite appeal (as we say in the biz). Lot’s of demonstrations of zooming, and cropping, and panorama-inginging-ing. It’s accompanied by pretty piano music with a simple chord and beat, like you’d expect from Chiat/Day and Apple. Very pretty. Altogether it is a quintessential example of clean, simple advertising.

Years ago, when I was going to Art Center to learn how to be an ad creative,  I was fortunate to take a rare class from Chiat/Day legend Lee Clow. (As far as I know, it was the only class he ever taught there…and with good reason.) Clow was the CD behind the historic “1984” Macintosh ad. He inspired us to keep things simple, to go for the heart, and to make things elegant. You can certainly see his influence in this new iPhone ad. He was one of the main reasons I decided to make a living in advertising…instead of neuro-ophthalmology.

The only copy in the ad is also simple, coming at the end where a voice over announcer says, “Every day, more photos are taken with the iPhone than with any other camera.” Very strong. Very simple. Very Clowesque.

Only it’s a fairly outrageous statement. Is it true? Are more photos taken with an iPhone than any other camera? With the Apple iOS continuing to lose market share to Android-based mobile OS, you have to ask yourself.

According to industry reports, last year Apple iOS had fallen to less than 20% global market share to Android’s 70%. And in an article in Fortune this week, iPhone is projected to drop to 9% from a high of 22% just six months ago. So either iPhone owners are taking pictures much more frequently than anyone else (like Samsung Galaxy III owners, or Canon or Nikon owners) or it’s just…oh, what’s the nice word for it? You know; when someone represents something that is different from reality. It’ll come to me.

I think, listening to my friends who are loyal Apple owners (whether Mac, iPhone, iPad, iPod), that they are so in love with the brand and the product that they must believe that the whole world is pretty much Apple-based now. Why else would you have any other brand? Apple is frequently reported in the press as being the world’s largest company (at least in terms of market cap), even though it’s a long way from being the actual largest company, too (see Fortune’s list of Fortune 500). So doesn’t that mean that more people have iPhones, iPads, and Macs than any other similar appliance?

I was looking at the stats on a client’s website yesterday and a curious datum hit me: Under “Page Views by Operating System” 72% were from Windows OS (which would include everything from Windows 8 back to, I guess, Windows 95), but just 7% were from Mac OS (it didn’t parse out the versions). If you add the mobile iOS , the total Apple share of this activity was less than 19%.  The balance was from Linux and Android.

I was surprised. This doesn’t seem like the world’s largest company. These numbers seem about consistent with Apple’s market share 20 years ago.  Not a whole lot of movement in the 29 years since Mac was introduced in 1984. By the end of that decade, Mac penetration into the personal computer market was also in the single digits. Like today.

In an article from last fall, ZDNet’s tech reporter Adrian Kingsley-Hughes headlines: “Mac OS X Overtakes Windows Vista in Global Market Share.”  The numbers don’t lie:  a whopping 7.13% for Mac to a pathetic 6.15% for Vista (never popular to begin with and by last year already on its way out). Further down in the article (you’ll notice, with a hilarious graph) he concedes that total Windows share has been unchanged for years at 92% to Mac OS X’s  7%.

So how can more people be taking pictures with an iPhone? And Apple be the largest company on earth? And everyone be using a Mac? It certainly seems that way whenever you go into a Starbucks and try to find an open table without that bitten apple staring at you.

This is Rule #2 of the Unbreakable Rules of Marketing. And Apple really does a bang-up job obeying it. Their ads, their brand, even their loyal customer base, all speak with one voice to control and cultivate that perception. There is only one choice in terms of computers, smartphones, tablets, and media players; and it’s Apple. So the iPhone ad can confidently state that more people take pictures with an iPhone than with any other camera, and nobody’s going to question it. It sure seems that way; so it must be true. The perfect sophistry.

Apple has done such a good job at synonymizing the iPhone with smartphones in general that when we see crowds of people holding up their little rectangles to take a picture at an event, we all assume they’re holding up iPhones. It’s hard to tell a Samsung from an iPhone at that distance, anyway. If we see someone using a tablet in public, we also assume it’s an iPad. In fact, no one uses the generics “smartphone” or “tablet” to describe these things; they’re iPhones and iPads. They’ve become the Kleenex®, Bandaid®, Aspirin®, Xerox®, and Coke® of electronics…without the ®s. That’s brand nirvana (except to the trademark attorneys).

Will anyone stand up for Windows? Anyone?

Of course, no one’s going to challenge Apple’s claims of brand superiority. You don’t have loyal gangs of Windows users coming to the defense of Microsoft. People who use Windows (including me), don’t feel particularly religious about it. It’s pretty much a generic when it comes to operating systems, even though each iteration does pretty much the same thing each new generation of Mac OS X does. But we’re not going to leap at the throat of someone who complains about Windows. Try criticizing a Mac or an iPad to an owner, though.  Those people are fanatics. (I can’t wait for the reaction to this post.)

It’s not because Apple products are so much better. It’s because Apple branding is. Just look at its market cap (#1 at $500 billion) versus its actual size (#55 at $108 billion). Apparently, people are five times more likely to buy Apple stock than Apple products.

Steve Jobs has been described as a visionary, a genius, an inspiration to all who seek to create heaven on earth. Of course, none of the innovations with which he is credited did he actually come up with first; the personal computer, the WYSIWIG graphical interface, the laptop, the smartphone, the tablet, the touchscreen interface were all developed by other people at other companies before his muse visited him. What he was a genius at, and what Apple continues to excel at, is brand marketing.  Nobody does it better.