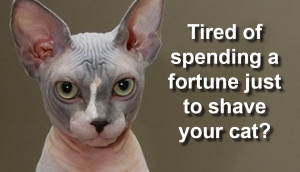 There’s been, in case you’ve been in hypersleep for the past five decades, a revolution in shaving technology. When I started shaving, all we had was a chipped shard of flint we shared within the Clan of the Cave Hamster. Worked fine. Then came the safety-razor. Then twin blades. Then three. Then four. But they didn’t stop there:  Then five with advanced sensitivity strips. Then vibrating, triaxially-rotating, self-lubricating heads. And now there’s Dollar Shave Club.

What I find unintentionally hilarious about the Dollar Shave Club’s advertising is that they solve problems I don’t have (which, to be fair, is something all razor marketing has ever done for years). Some of their commercials revolve around men having to get around the Mission Impossible security evidently guarding razor blades in stores, with the poor shopper being Tasered or beaten up when he tries to buy them–something we’ve all experienced, I’m sure.  Other spots  focus on how expensive traditional razor blades are, cleverly depicting hapless customers forced to trade in their grandpa’s wristwatches and all their clothes to afford to buy blades. Now there’s a new series of ads featuring gross, talking, “Brand X” razors that need replacing, which the owners are loathe to part with because the cost of replacement is somehow prohibitive. Also the Brand-X razors talk and have googly eyes, which is a little off-putting when you’re shaving.

Solving problems that don’t exist is an old trope in bad marketing: We’ve got nothing anybody wants, so invent some problem and solve it.

The trouble with the Dollar Shave concept, and with other mail-order razor subscription services, is that even if you understand the problems they make up, their solutions are weak. The misnamed Dollar claims they are cheaper than the Gillettes or Schicks you’ve been using. But they aren’t. Dollar’s run about $2.25 a pop for a comparable six-bladed cartridge, which is, depending on where you shop, about the same as the Gillettes and Schicks you toss in your basket (and, if you buy in bulk at Costco, a lot more expensive). So even the name Dollar Shave is misleading.

Also, do you know any store that locks their razor blades up? It isn’t exactly a controlled substance.  Maybe where I live, out here in the Wild Wild West, we can sashay into any old feed store and openly buy blades, condoms, weed, ammo, and weaponized anthrax right off the open shelves. But I’ve never seen razor blades locked up. Cigarettes maybe. But not razors. Is this an East Coast thing?

And then there’s the curious marketing concept of buying your razor blades by subscription–mail order.  What you get with both Dollar Shave and their competitor, Harry’s, is a package of four or more razor cartridges per month (depending on the subscription level) for about the same price you’d pay if you picked up a pack of Gillettes every six months at your local supermarket. The advantage, I guess, is that you don’t have to remember to put razor blades in your cart as you pass down aisle 14; you can wait for them to be mailed to you. Why this is an advantage, I don’t know. Unless you are housebound and can’t leave your front door because you are an invalid or under surveillance by spy satellites or are in the midst of a Call of Duty marathon. Again, another problem that just doesn’t exist.

How often, in fact, do any of us (males, at least) have to buy razors? It’s not like most of us are shaving our cats and run through a blade a week. A normal razor blade (with four parallel blades and all the latest gel strips) lasts me a month. Runs about $2.50 a cartridge. Admittedly, I’m not the most hirsute of people, but I can’t imagine even somebody as brillo-paddy as Ted Cruz going through more than one a week.

How about mail order toothpaste next? Or dental floss? Tired of having to defeat ninjas at the store just to buy dental floss? Get on our automatic plan and we’ll send you 30 yards of industrial-grade waxed floss every month.

Me, I still love the feel of a freshly chipped shard of flint.