Here’s an object lesson in how to kill off a great brand.

First off, you have to lie. Not just little lies. Nooo, those aren’t lethal enough. You have to make them big lies. Super-massive-black-hole-at-the-center-of-the-galaxy-sized lies.

Take the recent Volkswagen diesel scandal. From the land that brought us Joseph Goebbels comes one of the longest, biggest lies in marketing history; that of  cleanness of diesel powered cars.

Okay, at first, the idea that a diesel engine, already known for great mileage and power, can also operate below EPA limits seems too good to be true. Diesel has long been synonymous with dirty, carcinogenic, black smoke belching out of truck stacks. I mean, it’s burning oil, for crying out loud! But for a long time now, Volkswagen, that esteemed automaker that brought us the original Beetle and its ultra-honest advertising in the 60s, has been flogging the notion that they’ve come up with a diesel car that is not only fuel-efficient, but environmentally clean, all without giving up any performance. How do they do it? German Engineering.

Class, how many times do we have to learn the lesson of “too good to be true”?  And what is that lesson, Munchkins? Let’s all say it again: It’s not true.

It seems, according to a long investigation by our own EPA, a number of consumer groups, and the investigative agencies of several European governments, that Volkswagen had not only blatantly lied about its environment-friendly claims about their diesel cars, they deliberately built in clever software to fool the emissions testers. It goes far beyond just exaggerated advertising; it involves deceptive engineering…German deceptive engineering, though.

Let’s say you take your 2009 VW Jetta in to the appropriate facility to get it certified for registration. They hook it up to their computer and, unbeknown to anybody but Volkswagen, a secret  little program inside the car’s computer turns on the filter so that you pass. Then, when you drive out with that “passed” stamp,  and that self-satisfied feeling of having done your part to fight global warming, that little program secretly turns the filter off again and you go back to spewing as much muck into the air as a Panzer tank–as much as 40 times more than legally allowed by the EPA, in fact. (Read all about how it works  in any number of stories this week. Here’s one in the New York Times.)

Of course, the CEO of VW, Martin Winterkorn, resigned today; shocked, shocked, he tells us, that there was Schwindeleien ( German for shenanigans) going on behind his back at Volkswagen. This is a little much considering that VW  has long been famous for its highly centralized, Teutonic control culture. Central control is the leitmotif of German engineering, after all. But what do you do when you’re caught in a big lie? Double down with a bigger lie: “I had no such knowledge!”

Okay, great that Winterkorn resigned (I’m sure he had a very big parachute). And let’s see if any government agencies seek to prosecute him and any other executives at VW, putting them in orange overalls. But what about the 11 million people who shelled out a significant portion of their salaries for diesel cars they thought were legally compliant with their countries’ emission standards? How is Volkswagen ever going to make it up to them? There have as yet been no recalls. But if they are coming, what can the factory fix? They can disable the filter-disabling software, but can they make a diesel engine emission compliant and keep its fuel efficiency? Let’s see what the Magic Eight Ball says: 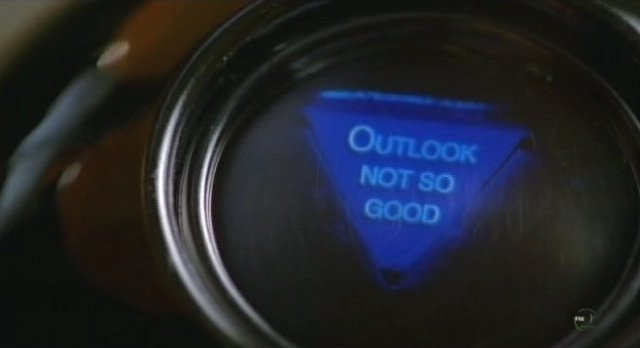 Volkswagen says they’ve put aside $7.8 billion to handle recall expenses. Does this mean they’ll buy the bullshit cars back? Well, only if each of the 11 million bilked buyers are willing to accept $709 in trade-in. If the average price of one of those diesel cars was $30k (just estimating based on advertised MSRP) VW’s going to need to set aside closer to a third of a trillion dollars to make it good with all those pissed-off customers.

My prediction (using my own trusty  M8B technology) is that the German Engineers at VW  have taken their respected brand and locked it in the garage with the motor running. Of course, other automakers like Ford, GM, Hyundai, Toyota, and Chrysler have all survived scandals involving exploding gas tanks, faulty air bags, unintended acceleration, and odometer tampering.  But none of those companies’ scandals were anywhere near as cynical, deliberate, pervasive, or harmful to their brands as VW’s. That company has built its reputation on reliability. From the very first “Think small” ad in 1959 to now, they’ve cultivated a brand position of being reliable-to-a-fault. And now this new generation of cynical smart-asses has just killed it. Great job, Martin. Hope you sold your stocks before you left.

Here is yet another example of Unbreakable Rule #9: Everything is marketing. This may have been a bad engineering decision, or a manufacturing decision, or a business decision, or an ethical decision. But ultimately it was a bad marketing decision. Because now nobody will trust Volkswagen again. Not its customers. Not its shareholders (if any stick around). Not its majority of hardworking, dedicated, honest employees. Not its dealers struggling on the narrowest of margins. Not governments charged with seeing to public safety and health. Nobody.

The other thing offensive about this story is that, once again, it feeds the belief (see Rule #2: Perception is reality) that marketing is a lie. I hate that. Marketing is not a lie. Marketing that lies is a lie. But marketing itself should always seek to tell the truth. It should find the best true thing to say about a product and portray that in as compelling a way as possible. But if you’re an marketer and you feel like you have to lie, get out of the business. Or resign the account, at the very least. And blow the whistle on the liars.

Probably one of the more unfortunate media placement decisions.