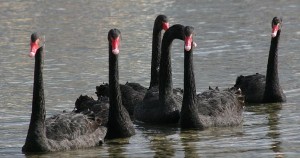 I’ve been thinking about all of the ridiculous upsets in reality, or at least data-driven predictions of reality, in the past three months. From Five Thirty Eight to all the major polls predicting an easy Clinton victory in last year’s election,  all were so wrong that everyone, including the winners, just stared with jaws agape at the broadcast that night. How could this be happening? What about the data?

Prior to that there was the major upset of the World Series, where, against overwhelming data-fueled prediction, the Cubs came from behind and won, heralding in a sign of the End Times as foretold in Revelations (or was it Nostradamus?). Then there was the CFP Bowl in which Clemson didn’t read the script and beat Alabama at the last minute (was that even legal?). Then the Superbowl upset of the upset (also at the last minute, more or less). And the most recent example was the fiasco at the end of the Oscars, in which slam-dunk favorite La La Land lost to Moonlight for Best Picture, even after the former had been mistakenly announced as the winner.

After all these upsets in prediction, it has occurred to me that data don’t know squat. Or we’ve been looking at the wrong data.

What’s going on? How can so many data-fueled models be so off? Aren’t we supposed to be living in a new, enlightened age where every tiny thing can be predicted, every human need anticipated before the human lifeform even knows what it needs?

Apparently not. If you thought that’s where we were going, then you haven’t tried to have a coherent exchange with Siri or Alexa lately. Or tried to get your iDevice to play the song you actually want to listen to instead of what it thinks you’d like to listen to.

I’m sure, too, that all of you have been emptying your email inbox every day of so-called “targeted” junk mail, finely tuned to your most minute desires based on your web-browsing history or your Facebook likes. What? You mean you aren’t worried about your severe-to-moderate irritable bowel syndrome at the moment?  Or that when you look up a title on Amazon or Netflix, they offer up random titles that their algorithms assume are just like what they think you are looking for? (Do you really care that people who watched Sherlock also watched My Big Fat Greek Wedding 2?)

Everything seems to be not just off, but spectacularly wrong.

Here’s what I think is going on: Reality is biting back. Again. Just at a point in history when we think we have reached the limit of all there is to know in the universe, and Big Data will be the answer to all human needs, everything we thought we knew turns out to be bass ackwards. It reminds me of a similar point of hubris at the end of the 19th century when it was also widely trumpeted by pompous scientists that mankind had just about learned everything that needed to be learned, and everything useful had been invented. Then came Einstein. And the Wright Brothers. And Henry Ford.

Now the age of Big Data is discovering that reality doesn’t give a shit; it has its own agenda.

Chaos theory is rearing its ugly head again. It’s quantum unpredictability (the Heisenberg Uncertainty Principle) applied to human behavior, whether that behavior is voting, playing a game, or buying.  Quantum Mechanics come into play in the physical world as the observational scale gets smaller and smaller, down at the sub-atomic level. And as that happens, predictability vanishes.

This getting it all wrong is especially true of data-driven advertising.  Advertising data-specialists can try to convince their clients that they can serve up an ad to the exact person in the precise frame of mind for their product at the perfect moment; when they’re ready to buy. But all of our personal experience is that they get it dead wrong more often than not.

Wait, Wait, Wait. Too Many Variables.

Besides the Quantum Mechanics of individual events,  there’s the sheer number of variables that sabotage predictability. Each game, each election, each competition, each purchase decision, each individual event has so many variables that the degrees of freedom in any statistical model flatten the bell curve, making it worthless as a predictive tool. The extreme outcomes on a distribution function become as likely as the mean.  The black swan event becomes a flock of black swans.

In the last election, those extra variables (like the ineffable frustration felt by the traditionally Democratic white labor voters) were ignored in the more traditional models used. Of course, pollsters will probably incorporate those variables in the next round, but then there will be other variables not taken into account. There always are. People always fight the next war with lessons learned from the last one.

Same with marketing again. At any instant of time, there are so many variables in play with a marketing campaign–the economy, social memes, the weather, external stressors, scandals involving your client, local conditions–that advertisers can’t possibly account for them all. And each one tends to spread out that bell curve, so you might as well take a wild guess as to how to frame your message, or where to put it.

But there’s a way around the fickleness of reality.

Great. So What’s a Marketing Professional to Do?

Well. You can always go back to marketing as an art, relying on the ancient psychological tricks of empathy and creativity to make yourself noticed and loved. These tricks used to work pretty damn well, back before Big Data swallowed up advertising like a swarm of army ants, eating it down to the bone. We’re starting to see these ancient tricks pop up again, like plants poking above the soil after a long drought. Every once in a while you see an entertaining TV spot, or a clever web ad that seeks to entertain as well as sell. Marketers are just starting to rediscover the power of creativity. They not only stand out, they use a key into the human psyche that Big Data never had.

This is Unbreakable Rule #3: Be Creative or Die.  It’s also Rule #6: Give Love to Get Love. Data may allow you to ring the doorbell of the most likely customer for your product, but it won’t help you when the door is opened. For that you need to disarm, to charm, to entertain, to win that customer over and keep them from slamming the door in your face, or clicking “skip”. And for that you need both empathy and creativity.

This is what the winner of the last election did, upsetting all predictions; he empathized with just enough people to get him elected. And he sure entertained the hell out of them. He even entertained those who didn’t vote for him, though they continue to hate him. And the reality of that vote will bite not just pollsters, but all of us.

The other consequence of these flock of black swans we’ve been experiencing has been that people have begun to lose faith in data at all.  We now live in a time where conspiracy theories abound, where people believe what they want to believe. To hell with the data! Or so-called facts and experts. Reality is what each person says it is. The biggest problem facing us now is still a marketing one. It is to persuade people that data and mathematical models, even though discredited by recent events, are still useful.  And purveyors of them, pollsters, marketers, account planners, all need to start marketing their value again to a public that has lost faith in data.